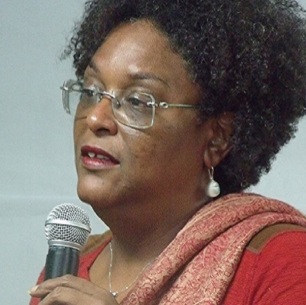 Barbados elections have not featured a nationally televised debate – between party leaders or otherwise – for the country’s last several elections.

This piece imagines what a 2018 Leader debate would look like, told from the perspective of the show’s producer:-

Leader of the DLP – The Rt. Hon Freundel Stuart

Leader of the BLP – The Hon Mia Mottley

Leaders of the UPP/Solutions Barbados

Several other parties were considered, but no one voted for them

…in the meeting planning event.

An esteemed regional journalist is flown in to host the event, since the DLP don’t engage with local media from non-state owned media houses.

1800 hours: Honorary guests and political hopefuls begin arriving. They are to be kept from walking next to or speaking with each other in the hallways in case friction between them sets off fire alarms and the roof sprinkler system.

Note to self on clipboard – CHECK BACK IN 3 HOURS.

1900-1945: Anticipation is building on the social media page where the event will be live streamed. People are looking for “The Truth” the various parties have referred to during the campaign. Production team, stage crew and ancillary staff come together in a joint search effort, but no one is able to find it.

1955: Solutions Barbados leader is on stage, threatening to fine participants $250,000 if any of them switch places.

2001: Freundel memes start on the Internet

2015: After some too-long introductions and explaining rules for the night, the debate begins in earnest.

PM Stuart begins by launching a fancy BLP insult with a medieval reference, but he is the only one who understands it.

2020: Leaders of the UPP/BIM/Solutions Barbados/BFP etc. follow PM Stuart by launching an all-out attack on Ms Mottley. Frantic backstage scenes as the production team ponders renaming the event “The Mia Mottley Show” but ultimately decides against it.

2030: The moderator is having to constantly interrupt Ms Mottley’s contributions “TIME!” “TIME!” “TIME!” and remind debaters of the 5 minute limit for responses. Ms Mottley complains she’s only ever accustomed to speaking for 5 hours at a time.

2045: UPP Leader’s contributions are being interrupted by constant reports of her party’s members making untimely and ill advised statements in public.

2100: Debaters are asked what they think of Natalie Harewood. But no one recognises who they mean when the media doesn’t first refer to her as “Former sex worker”

2110: An audience member is finally able to ask PM Stuart if he is going to present his plan for the country or whether he will only talk about Mia Mottley. He responds “Mia Mottley”, and twerks.

2115: The floor is fully open for questions from the audience. Social media viewers had seemed the most anxious for this opportunity during the first hour of broadcast, but now seem equally caught up commenting with their personal spin on soundbites, sharing screenshots of other viewers’ comments, along with hurriedly prepared memes.

2120: Several members of the audience rise to ask their questions, but appear visibly frustrated with the responses of the leaders, as they [audience members] are responded to with flowery terms and references to party manifestos.

One leader: “Visit our Facebook page and you’ll see…”

Audience member: “My phone is already ON your Facebook page!”

2130: A visibly frazzled moderator draws the event to a close, having edged dangerously close to official end of broadcast time. “Stink looks” are exchanged between politicians, and likewise between moderator and show producers.

Audience members exit mumbling amongst themselves in hush tones, wondering “Buh wuh I REALLY now see at all ???”, glad only in the fact that they don’t have to request their money back.

Most of social media has switched to live streaming from campaign rallies, while a few question whether “this whole debate thing” was even worth it in the first place.